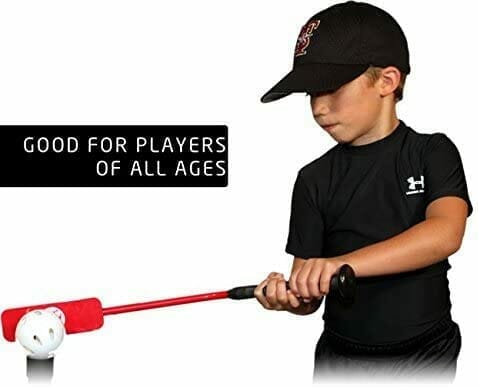 I get a teeny sales commission on this thing. If you want to get a good training aid, think about the Insider Bat.  I have an Amazon sponsored link but I don’t think I’ll make more than 5 cents or so if you buy one.

So what is an insider bat, you say?

Well, I have used it for years — it’s a very clever piece of metal that, if you use it, forces you to align top hand and bottom hand at contact.  Many young kids “roll over” at contact where their wrists immediately snap at contact and that can cause weak ground balls. If you listen to baseball announcers you’ll hear them say “Oh my, he “rolled over” on that curve ball.”  They are saying the wrists didn’t stay firm as the batter was sort of tricked by the curve ball and just couldn’t blast the ball.

Rolling over at contact is brutal to fix.  Interestingly, for some kids, the Insider Bat fixes it immediately.  Sometimes you don’t even know they are rolling over.  But two minutes with some whiffle balls and the thing has a clever flat spot for contact so if you are rolling over you end up with the flat spot facing the ground at contact, so you just can’t hit a ball. I remember a 12-year-old who was a half decent hitter and I tossed him some whiffle balls–he couldn’t hit them with the insider bat.  Not a one. It drove him nuts and we found out that the flat thing was never level with the ball.  He swung in slow motion a few times and then started smashing the balls when he could see the problem.

After that, before every game he came over and said “toss me some balls on the batting toy” which I did and lo I did. He went from being our sort of OK 7,8,9 hitter to being a very respectable 5,6,7 hitter.

It’s not magic for all kids, but it is an awesome diagnostic tool and a good tool to fix things. They last forever as they have no moving parts – the only reason I have to buy new ones every now and then is I lose the things as they aren’t very big.  So keep track of them.  I’m so excited I splurged and got two new ones for the upcoming season.  I can’t wait to see how the team does with them.