Balls hit in the air (or balls thrown from one player to another) are adventures.  No single action in baseball tests your fear of the ball like having a ball hit or thrown to you.  Most players outgrow the fear of being hit by the ball, but at AA age (8 or 9) the fear is very real.

Getting players over the fear of the ball must be coached repeatedly.  We strongly suggest using tennis balls to start with so a missed ball does not hurt the player and make the learning experience harder than it needs to be.  We really like a giant oversized tennis ball as kids have a lot of fun with it and it really eliminates fear of the ball. 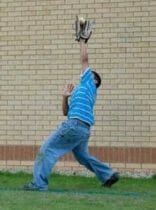 Have player stand in front of about about 5 feet away. Toss the ball about 15 feet behind them to one side or the other.  Put it up there with enough height they can get it.  The only way they can get it is with a good drop step (e.g.; short step backward with the foot that is closest) to the ball and then a crossover step so they drift diagonally back to the ball.  This needs to become muscle memory so a lot of reps is good.  I have found a few kids that can really get this, but honestly this may be tough for many players.   Stay with it and they’ll gradually get better. 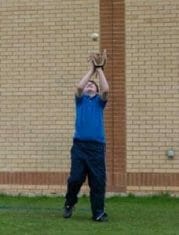 There is no substitute for hitting “live” fly balls to players.  It is very important that they begin to track balls coming off the bat and make a quick determination of where the ball is going to land.  One variation of this drill is to use tennis balls and a tennis raquet as a substitute for a bat and a baseball.  The swing action of the raquet is a reasonable proxy for a bat’s motion and the tennis ball keeps the risk of injury low.  Also, for assistant coaches and parents who really aren’t so great at hitting fly balls this saves a lot of time as its not all that helpful for them to hit one 90 feet past a player and have the player go chase the ball, pick some flowers and then return the ball 20 minutes later.

Get Under Ball with Helmet 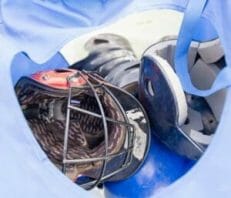 No gloves needed on this drill.  You need a batting helmet with a face mask for each player in the drill.

The coach stands about 15 feet away from a player and tosses a tennis ball into the air.  The player runs to get under the ball.  If it hits his helmet, he gets one point.  If it hits the facemask, he gets two points.  As players get better, make the distance longer.  This is a fun drill and players enjoy seeing who gets the most points. 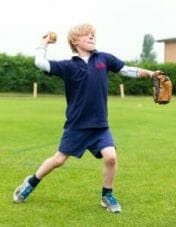 A favorite drill and good to do any time.  Make two lines of players about 30-40 feet apart with (they can all be on a foul line or one line can be at base and another line at the next base).   Have first player in the line throw to the first player in the next line and have them immediately run to the last spot of the line they just threw to.   This forces players to throw accurately and catch.  Have them count how many in a row.  I had one all-star team where we ended practice by insisting that they get 50 in a row.  In the pre-season I use this when the fields are too wet to play on as you don’t need a whole field to do this one. 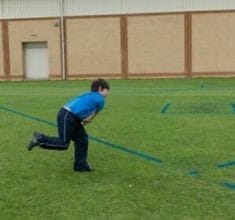 I invented this one (this one may be my only invention — all the rest are stolen or modifcations).  Take a bucket of balls and have a player ten feet in front of you.  Toss the ball to their right with some elevation.  Once they catch it their job is to flip it quickly back to me and start heading in the other direction.  Meanwhile I have grabbed another ball out of the bucket and i throw back to their left.  Player keeps going for five or ten balls depending upon how far you are throwing it.  If you do it well, player will be out of breath, but begging for another turn.   They really learn what their range is with this one, but if you make it too hard the bigger kids will get hurt as they dive for these.  Make sure grass is soft (maybe after a rain) before you do this one and encourage them not to kill themselves. 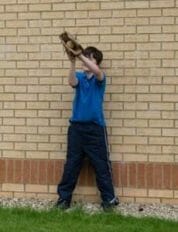 Coach throws a tennis ball from ten feet gently at face of plyer.  Player must move up glove to catch ball before it hits his face.  Once the player has mastered this distance, the coach can move back to make thorws longer.

We ask that the player have his back to a wall or fence to avoid sidestepping (or acting like a matador) when the ball is thrown.  It is a natural tendency for young players to want to sidestep a throw because they are scared of being hit.  Putting them against a wall or fence takes that option away. I love starting practice with this one.  Just set up a cone about 20-30 feet away and have players start next to you and then run to the cone and then run a down-and-out football pattern to their right or left.  Hit them as they are moving with a fly ball.  This helps them track balls, gives them confidence and you can vary this for all ages.  Start with tennis balls for the younger kids and for 12 year olds you can really lead them and they’ll have fun seeing if they can get to it.  Once they catch it have them throw immediately to a coach next to you so they get used to getting rid of the ball after a catch.