Pitching a ball from 46 feet that will land across a small plate is not at all easy for a typical AA player. 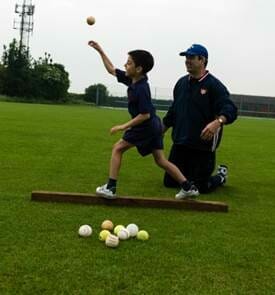 An average AA draft (8 and 9 year olds) will of 70-100 players will have about five very solid pitchers, another five probable pitchers and the rest you will have to teach.

Since pitching is the key enabler of the game, you have to become adept at getting kids to throw strikes.

Once they throw strikes to a target on a consistent basis (5 out of 10 pitches), then introduce a live batter.  This will often change the success ratio to 1 out of 10.

Pitchers have to learn to focus on the batter and  then throw a pitch.  Much of throwing strikes is mental.  If you take a player and have them recite, “I am going to hit the target,” before they throw, they will often hit the target far better than if they didn’t say this.

Players often throw without thinking about it. Pitching at the younger levels is much like throwing. If they have good throwing mechanics, they will be fine pitchers.

Finally, encourage pitchers to use the same mechanics with each pitch.

Before a Pitcher Begins Throwing 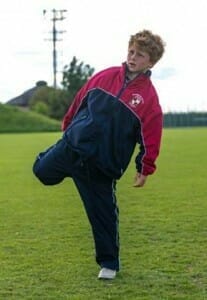 We’ll start with a few things to remember about warming up:

Have pitchers practice with a player holding a bat who is instructed not to swing.  You’ll find the presence of a batter will “spook” a young pitcher.  Its better to get used to this in practice then in a game.

Core strength has a lot to do with turning hips powerfully and with balance.  If players want to pitch, they will have more success if they do lots of core strengthening (e.g.; sit ups, push ups, holding plank position).

Do not give a lot of advice on mechanics during a game.  You can use one or two work cues you have worked on with a particular pitcher.

I have found that yelling, “Fix your hat,” is a great way to break up too much tension in pitcher.

Encourage them to take a deep breath and have fun.  We don’t want them to take forever as games can be slow enough, but some new pitchers absolutely get the ball and almost run to the rubber and throw.

Make sure they get set and have a target from the catcher before they throw.

Encourage pitchers to do the same thing with every pitch.  Many young pitchers turn each pitch into an experiment into what to try next – sidearm, windup, stretch, knuckle ball.

New pitchers just need a  4-seam fastball and if they are throwing a lot of strikes you can teach them the 2-seam fastball, but that should be the end of it.  The key is that they throw a pitch, take three steps toward the catcher, ask for the ball and return to the mound.

Try to encourage them not to get into cat and mouse games with runners.  If they catch the ball cleanly and go back to the mound with two or three quick steps, its unlikely the runner is going to steal home and if the runner does. Just have the pitcher throw to the catcher and get them out.

Work on having them showing no reaction after a pitch.  Just ASK for the BALL.

This is oversimplifying things, but it’s a start.

Start with Feet wide, knees bent, weight on ball of the foot and lean forward slightly.  All new pitchers should start from the stretch (only one book differs on that and it’s a good one, but I digress — there is no such thing as real agreement between baseball coaches especially on mechanics).   This means belly button points 90 degrees away from target and feet are on a line with the target. Here is my son, but he wasn’t posing for this he was about to throw and I wouldn’t mind his feet a little wider or his knees a little more bent.  I am happy that he is leaning forward slightly.  You rarely see photos of a 9 year old regular player.  Its always all-stars or professional players, but odds are you won’t be coaching a team full of all-stars.

Good feet wide, would like leaning forward a little more, good determination. Also shows me shadowing the player, so I act like I throw left handed so they can see everything (if they are right handed)

To start, just do a stride and throw.  You can add a front leg lift later

As the stride foot lands, the throwing hand gets to its launch position (furthest from the target).  This is sometimes called the power position in basic books and Tom House calls it the flex-T. Here’s my son — wish he had a longer stride for this photo, but it gives you the idea.  I’m obviously going to be adding lots of photos to the site over time but these at least give you some idea of what the text is talking about.

Here’s our flex-T again. Need more leaning forward and you can see here lead glove is about to fly out.

Work on stride and arm back a zillion times until the timing is second nature.  Stride foot has to land softly, weight stays back.  If the ball is back before the front foot lands, more than likely the arm will have to stop and wait for the leg to land which destroys any hope for a nice fluid motion.

Hate to pick on my son here, but its the only picture I have that shows this so nicely so here it is. I’ll have to remember to add some if he ends up pitching this season.

Note that just because he is my son and I’ll be the coach of the team doesn’t mean that he will be a pitcher.

Note he does have good extension of the throwing arm here, but the stride foot has got to be down when the ball is at its furthest point from the batter. The drill for this is leg-up-gloves-up, leg down- glove down and teach the leg motion to be connected to the arm motion.

When stride foot lands, back foot turns (just like in batting) and starts the hip rotation which is where all the power comes from.  Back foot turns and arm starts moving forward.  This is a nice one of my son turning back foot with a strong front side.  Many players windmill their glove arm and that really messes up everything.  If you can get players to get to this point, you can have them shut their eyes and they will throw a strike.  Most mistakes happen before here (see the earlier photo just before this one).

Rear foot has turned, eyes are on target, but lead glove is NOT strong.

The arm continues forward and does not stop so it follows through.  Back leg comes up into air and if all goes well, player looks like superman as he reaches the second balance point.  Eyes remain on the target at all times.

Second balance point, ideally back is flat here and arm follows through.

Key coaching points are balance, eyes on target and stride to target.  Most pitchers will throw strikes if they really master these things.    Once you get that far work on having them bend their back as they throw and add an initial leg lift to balance point.

Before starting the pitching motion (Step #0):

Note: While the steps below imply that pitching is performed in distinct “steps”, the reality is that the final three “steps” occur very quickly.  The goal is to have those final steps performed as an integrated set.  We break them out here only for expository purposes.

(Note: Each of Steps #1-3 can be repeated as “stand alone” steps with the pitcher to check their mechanics.)