There is no substitute for repetition for ground balls.  Remind teams that games are usually won or lost based on fielding routine ground balls.  If a shortstop misses a tough smash deep in the hole, well the team just shrugs and moves on.  If the second baseman missed a nice easy roller, the team and especially the pitcher can easily become frustrated.  Once this happens, bad things tend to be contagious and team defense can suffer.  Ozzie Smith, hall of fame shortstop, insisted on taking 100 ground balls before each game.  If he can take 100 ground balls, there should be no reason young players should not get as many ground balls as possible.

For any ground ball drill, you can add a freeze to it.  When the ball gets ot the player have them bend, keeping back flat and parallel to the ground. The player must use the throwing hand to cover ground ball.  The player holds the position with the ball for a count of 3-2-1 and then pops up into throwing position and throws ball back to coach.  This drill is terrific to get players to use both hands to field ground balls and to get their throwing hand on the ball quickly. 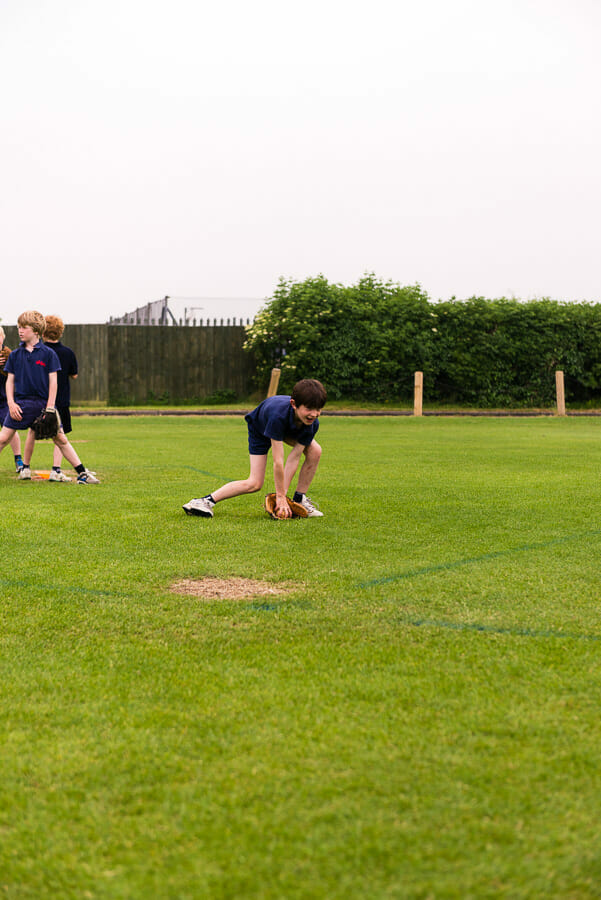 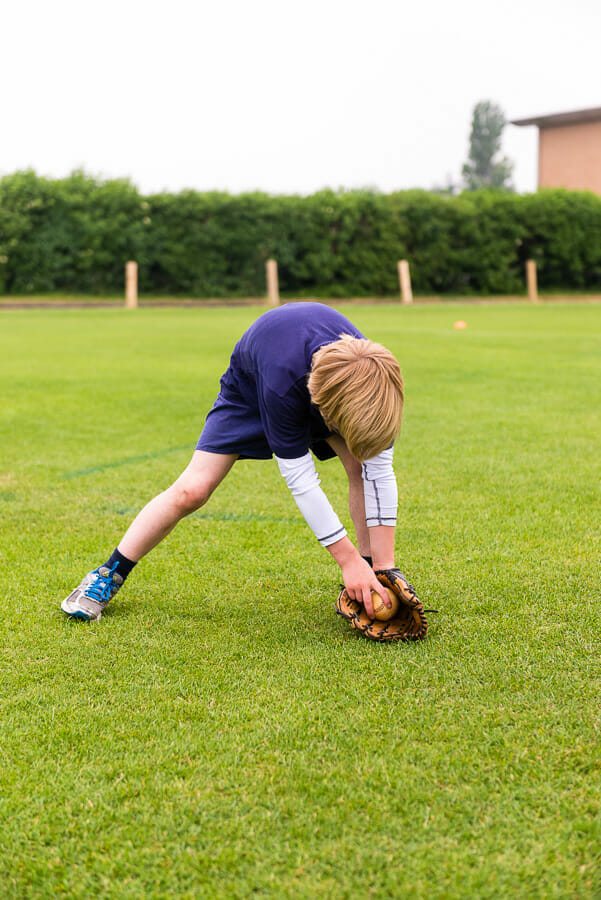 Ball a little off to the side, as players get more advanced ball close to front leg is good, but for starters lets get ball over bellybutton. 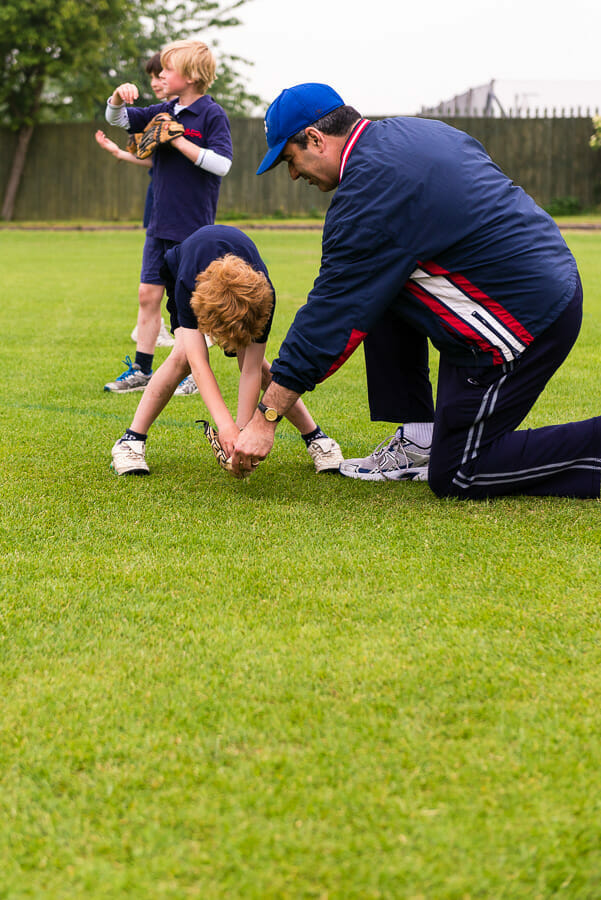 Here I am fixing it — notice that you need to actually show player where to put ball. Also I’d like back flatter.

This drill is very versatile.  You need one or two coaches to hit grounders. You can even have four coaches hitting grounders.  With two coaches, have one hit to SS and the other hit to 2B.   With four coaches, one can hit to 3B, one to SS, one to 2B and one to 1B.    One drill we like is to set up two lines.  One at shortstop and one at second.  The fielder who makes the play at short throws to 3B.  The line at 2B makes the play and throws to a fielder at first.  After making the play the fielder goes to 3B if they were in the SS line or 1B if they were in the 2B line.  This turns into a good catching drill too as the throws are short.  As soon as the play is over the player who caught the ball at 3B or 1B returns to the end of their line. 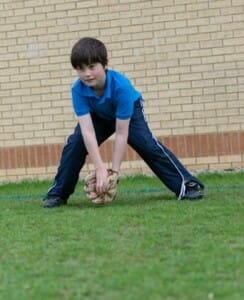 It is crucial to work the 2B/SS play as that’s an easy throw and catch and it can build some confidence.  In some leagues it can be a key out (suppose your league limits runners from stealing second).  Start by rolling balls from the pitchers mound and having players attack the ball.  The fielder should then throw to 2B.  The teaches the players to either “stay home” if the ball is hit in their direction; or break to cover 2B if it is not.  So on every ground ball that is hit, both players are in motion.  It builds the correct muscle memory that will be used in games.  Remember, if you do not practice it many many times, do not expect it to happen in a game.  Screaming COVER SECOND after no one does it in a game is not the best way to teach.  Working it repeatedly in practice is far more successful but don’t worry the authors have screamed COVER SECOND plenty of times in games.

Do not smash a hard shot to the players. Work on nice, routine ground balls.  If you have to, roll the balls to the players until they have success, but it is important for them to learn to see the ball come off a bat.

This drill does not require coaches to hit a batted ball to the players. Balls are rolled, bounced or thrown.  The drill starts with coaches positioned on the infield grass, ten to fifteen feet from the infield dirt.  They are facing the outfield. You can think of them being positioned in regular infield spots (3B, SS, 2B, 1B). 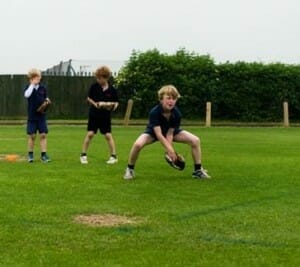 Then, the player who was in 3B position moves to SS . The coach who is rolling to the SS then rolls ground ball. Player fields, throws back to coach and move on around field.  When player has finished journey around the infield he hustle back to the line by running to home plate and then to the end of line.

When the first player moves from 3B to SS, the second player comes out to field the grounder at 3B.  When the second player moves to SS, the third player comes out to field grounders at 3B and so forth.  This is a great drill. It combines fielding, throwing and conditioning.  Plus, you can mix it up by doing ground balls for a few minutes, then switch to throwing line drives or pop ups.  For the latter two you may want to use tennis ball.   You can also vary the starting point. IF you line up the players along the right field foul line, players will move to their right across the diamond.  Starting at 3B will have the players moving left.

A variation is to use the pancake glove or soft hands glove.  This is a flat glove (most sporting good stores have them and Costco.com sometimes sells packs of five for $30).  The players wear this glove as it forces them to cover the ball with their bare hand when they get it (e.g.; like an alligator).

Before the pitch we want the whole defense not to just suddenly be in “BASEBALL READY”  but to actually be moving toward the hitter.  Slowly as if they are a tennis player about to return a serve.  They don’t know which way the ball will be hit and moving from a standing start is tough.  Much easier to be on the balls of your feet after some slight movement.

This has to be worked repeatedly until its second nature.  Many games are lost because players aren’t ready when a routine ball is hit to them.  Any time you spend really working on this in practice will ingrain it.  Even when hitting infield, sometimes its good to toss the ball up and catch it instead of hitting it just to see if everyone did a creep, creep show.

This fielding drill can be done at any infield position.  The players get in a line to field grounders.  One coach hits or rolls the grounders.  A second coach serves as the first baseman.

First kid steps up: if he fields cleanly and make a clean throw to first, he gets to go to the back of the line.

If, however, the kid’s field or throw is not clean or accurate — he’s on the “hot seat” (standing to the side).

If the next player fields and throws cleanly, the player on the “hot seat” is out of the competition.

If the next player, however, also messes up, that next kid is now on the “hot seat,” and the original “hot seat” occupant gets to go to the back of the line.   Go until one kid remains.