Hitting and the Strong Side What follows now is a discussion that makes me feel like I’m giving away the nuclear codes.   Getting the hang of this took me a LOT of time of watching videos of major leaguers, frame by frame analysis, talking to college hitting coaches.  This is solid gold if you are a coach — most just yell HIT IT LIKE YOU MEAN IT or ELBOW UP, on which I can write 100 blog posts, but pre-swing ELBOW-UP really is just an attempt at keeping players from dropping their shoulder during the swing and doesn’t guarantee they won’t.
I rarely hear a coach or parent say STRONG FRONT SIDE — and trust me it’s a bigger deal.  It’s hard to teach, takes patience, but when players get it, very good things happen.  Coaching tips remind me of these household tips like HINTS FROM HELOISE — you know stuff like use toothpaste to clean your shoes or whatever — I don’t think that’s a real one but I digress.  This blog contains a really good tip.
My high school aged son just went to a baseball practice (at long last) yesterday and we were talking about my general theory that its not great to coach mechanics in a game as in “BEND YOUR KNEES, JOHNNY” at full volume and that it should all be muscle memory learned from practice and yelling during a game doesn’t do much.  So my son said,  “yeah but, I try to tell myself LEG STRAIGHT” when batting and it helps.  What does he mean?  Many little league kids don’t get to a strong front side at the end of a swing,  they stride, turn their hips and as the weight transfer occurs they collapse their front knee and its a disaster.  Their head moves too much and collapsing of the front side means they destroy the momentum that the hip started when it begins to turn.
Put your hands on your hips, bend your knees slightly, feet slightly more than shoulder width apart and now stride with your front foot and then turn on the ball of you back foot like you are hitting.  Now notice that as your stride foot lands, you naturally end up bending your knee a little more and then your hips stop turning.  Picture a young player swinging his hardest and all that excitement and now you can see that as the bat comes around they may well bend that knee a LOT.  As that front knee bends, the head moves with it.
Now reset and stride and this time as you turn your back foot straighten your front leg.
Notice that your hips continue to turn a good bit farther than they did when the knee collapses.   Notice it may feel weird as now the front hip is actually turning more than usual and the muscles in the leg may feel weird as they are now really pushing that hip as it turns so you may be using some muscles that don’t always get used.
Here’s a picture of a kid who is doing it perfectly: 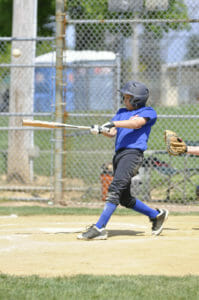 LOOK at the STRONG FRONT SIDE.  The front leg is STRAIGHT and it’s so sweet.  Watch every major leaguer and anyone but a slash hitter like Ichiro (who used to do all kinds of crazy things at the plate) all end with a strong  front side.  Why do they all do this despite tremendous variance in pre-swing activities?  They do it because of physics.  They need that hip to keep turning and ending strong keeps their head up so the head doesn’t move at all during the swing.  Think about a poor brain trying to track a moving object at high speed.  If the head moves it’s more computation to figure out what is going on.   Take a camera and move it around while you try to focus on an object — it’s a disaster right?  The picture is taken right after contact so its not bad — if you want to really make sure things are going well film your players and get the photo of how they look right at contact.   An app called CoachesEye is wonderful for frame by frame viewing of this stuff.
So nail this picture into your brain and show your team.  Then the drills for this are CLAP (you clap) they stride with hands on hips and CLAP AGAIN and they turn their back foot while straightening out or pushing BACK on the front leg.  Tell them it’s Pushmi Pullyu, the gazelle-unicorn cross with two heads from Doctor Doolittle.  The pushing back helps turn the hip.   Do this a few times before they swing and remember it takes 900 reps to build muscle memory so figure if you do 10 a day they can get there in 90 days — and lucky us its MARCH so we can get this done in time for the end of the season.
When I watch other teams in batting practice I watch for collapsing of the front side and I know that I can bring my outfield up on these kids as odds are the ball won’t be going very far off of those hitters and they are far more likely to hit ground balls.  Remember in high school routine grounders are OUTS — we need LINE DRIVES and its hard to hit one if your front side collapses.